It’s important to not just look at Tarot cards in isolation. Examining the similarities and differences between Tarot cards helps you understand them better.

Two cards that seem to cover similar concepts are Justice and Judgement. 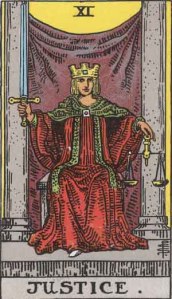 Justice: A woman sits in a chair holding a pair of scales and a sword in her hands. The scales are to weigh her options. The sword is to make a clear choice one way or another once she has done that. To cut off from the past.

Judgement: A group of people rise naked from what looks like coffins and open their arms towards the heavens where an angel is calling on a trumpet. I know what you’re thinking: What the? But the theory is, these people are opening themselves up spiritually.

In Justice you are making a judgement about which option you should take. Do you stick with the same job or try another? Do you get married or stay single? Either that or karma comes along, kicks you in the butt and makes the decision for you, based on the actions you have taken in your life so far. Decisions are made. Actions taken.

In Judgement the action is reflective, inner. You are called to think of those around you. To fulfill a higher purpose than that which you have followed so far. Called to consider the deeper spiritual implications of your choices. Called to forgive. Yourself. And others. An inner shift takes place and profound change can follow. You might give up your materialistic western lifestyle and become a Buddhist monk. Chuck in your job as a lawyer and study teaching.

The choices made in Justice are logical.

The choices made in Judgement are radical.

Which card do you relate to the most?