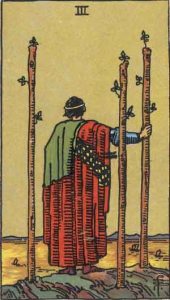 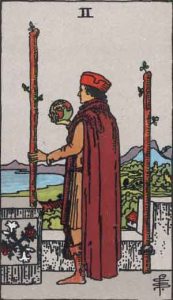 I want to focus on the Three of Wands today but I’ve included a photo of the Two of Wands because the two cards are very similar in some ways and I want to look at that.

In the Three of Wands a man stands looking out at the horizon holding onto a wand with two more at his back. As I said yesterday, wands represent skills, talents or enterprizes you embark on. The number three stands for growth. Like in the Two of Wands the man is holding a wand while contemplating the horizon as if searching for inspiration. You feel like he’s still weighing his options. But here his horizons, the possibilities, are far wider.

The difference this time round is that he has some runs on the board. There are more wands at his back. And look where he’s standing: On the ground not atop some airy-fairy castle. His tattered and torn garments also indicate that he’s been around the block.

And notice how you can’t see his left arm. This suggests he’s considering leaving behind the wand on that side. Whatever it might represent.

Receiving this card in a reading means that you are facing a situation where you have the opportunity to grab something new. But in doing so you may have to leave something behind, something you’re good at. Maybe a particular job or a whole career or just the way you make the bed. Not always an easy thing to do. Especially when you’ve experienced success in that area of your life. Habits are hard to break and the familiar feels safe. But wands ask you to be brave. (I folded a mean hospital corner on my bedsheets as a kid but heck when fitted sheets and doonas came along it seemed crazy not to go with the fluff and run school of bed-making. I’ve never looked back.)

This card says go for it. Your ship is literally coming in, several of them in fact. Lol.

Can you think of any examples of a Three of Wands situation you have recently faced in your life?