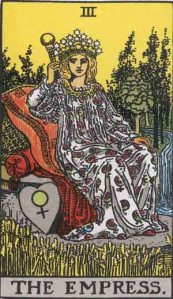 I’m having a fat day. As a rule I don’t have them often and it doesn’t worry me too much as the feeling will pass, but it puts me in mind of The Empress card. She rules indulgence. Lazy days. Enjoying your favourite foods. Lying out in the sun for hours on end trolling through crap magazines or the internet on your iPhone. Sometimes she can go a bit too far.  Too much chocolate, not enough exercise (cough cough that could be me) and before you know it the scales have crept up a notch or two. Next thing The Emperor card will be popping up in your readings signaling that’s it time to get some self-discipline into your daily routine.

Do you ever have ‘feeling fat’ days?