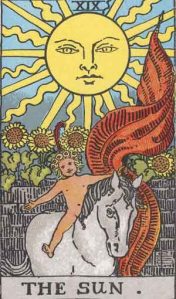 ‘Growing Into The Person You Always Should Have Been’ is the title of a newspaper article I read today in the local rag written by one of my favourite social commentators, a woman by the name of Wendy Tuohy.

In the article she explains this is a direct quote from David Bowie of all people, the once-upon-a-time glam rock god who has morphed into a content homebody. He gave the quote a few years ago when explaining why he doesn’t make much music anymore. Because he’s happy.

‘I don’t have that sense of loneliness I had before, which was very strong…I never thought I would be such a family-oriented guy. But somebody said to me that as you get older you become the person that you always should have been, and that’s happening to me.’

This is the most brilliant description of The Sun card I’ve ever come across. The Sun is the third last card in Life Lessons Tarot (aka the Major Arcana) which as I’ve explained before is like the Holy Book of Tarot. It’s the group of cards which represent the profound experiences we have as human beings throughout our lifetime. The Sun represents the experience of becoming more truly yourself. It’s near the end of Life Lessons Tarot because as Bowie intimates it’s not until you’ve lived a bit that (a) you can work out what makes you happy and then (b) manifest those things in your life.

Despite the unspoken assumption in music, movies, ads, the fashion and beauty industry etc etc etc that the best years of your life all occur before you hit 40 Wendy says she bloody loves growing older. For the very reason Bowie has mentioned. Because she is so much happier in herself now. And I couldn’t agree more. Like her, I don’t want to press speed-dial or anything to hasten the aging process but what doesn’t get discussed much in the media is the massive mental health benefits of middle age. Scientific studies confirm this phenomenon. In survey after survey the fifty plus age group appears the happiest. Sixty year olds even more so. Which no doubt must seem inexplicable to teenagers and twenty-somethings the world over who look at their parent’s stay-at-home Saturday nights on the couch with disgust. But being a boring old mum or dad has delights and excitements young people aren’t able to comprehend.

The Sun highlights one of the pay-offs of the human journey. That’s why I love Tarot cards so much. For the beautiful philosophy behind them. Getting older doesn’t seem the tragedy it’s made out to be in popular culture when viewed through a Tarot lens (or a David Bowie quote).

I’m going to put a passage on my Facebook page from the yeartochange.tumbler.com which shines another light on The Sun card message (boom boom) and was published today as well by chance.

How do you feel about getting older?

2 thoughts on “The Sun: Growing Into The Person You Always Should Have Been!”