My thoughts today are with the families and friends of those who have passed away during  the once-in-a-lifetime weather event happening along the U.S. east coast. So I thought I’d explore different types of death Tarot style. Keeping in mind that the Death card doesn’t always mean someone is going to die. Far from it. But sometimes it does. Death during a freak event such as Hurricane Sandy would be represented as follows: 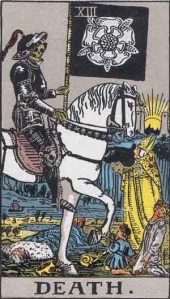 Death + The Tower: A sudden death caused by accident or misadventure.

Death+ The Fool: An unexpected death 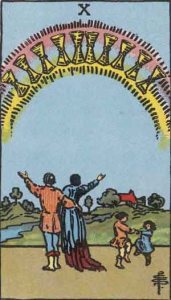 Death + 10 Cups: Death at home with loved ones.

Death + 4 Swords: Dying in your sleep.

Death + The Hanged Man: Waiting for death to arrive.

Death + 5 Pentacles: Death of a poor person. Or death of someone with no belief in the afterlife. 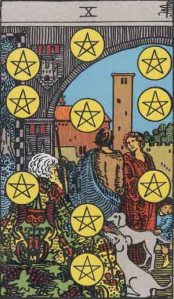 Can you think of anymore possibilities?