I started this post several weeks ago when it was the watercooler story of the day. Then put it on ice when I went away on holiday. But Lance’s very qualified confession makes it the story that just keeps on giving. There seem to be so many levels to his deception. A few more were explored tonight on a cutting edge Australian current affairs program ‘Four Corners’.

So let’s have a look at the Tarot of Lance Armstrong’s confession. 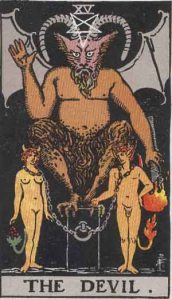 Well it’s official. Lance Armstrong is The Devil. He took drugs, pressured his team mates to take them, pimped them to others, hid his habit and theirs, lied under oath, convinced others to lie under oath, bribed them to do so. Bullied those who dared expose the truth about him, aggressively defamed, vilified and sued them, destroyed their reputations and their careers, cost them jobs, money and friends. Accepted world acclaim and large sums of money on false pretenses i.e. committed fraud. And hid all these crimes behind the saintly halo of a man committed to charity. For years and years and years and years. Decades. And still he lies. Pretending to be just one of the riders who took drugs rather than the mastermind all the evidence says he has been. Evil thy name is Lance. 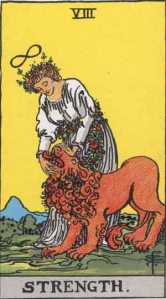 Strength: Betsy Andreu, the wife of one of Lance’s former team mates, was one of the first to raise the alarm. Despite years of intimidation from Lance – he assassinated her character, calling her crazy, always off the record – she refused to change her story. Emma O’Reilly, a masseuse and assistant on the US Postal Team, was called an alcoholic whore by Lance and suffered the nightmare of a two and a half year lawsuit when she dared to speak out. These women are heroes. The pressure they were under to retract their stories was enormous. But they never did. Those gals deserve a medal at the very least. 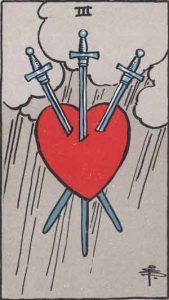 Three Of Swords: This is how his fans feel. Stabbed in the heart. Betrayed. Grief stricken. So many believed in him. And when we doubted his lies convinced us to believe again. 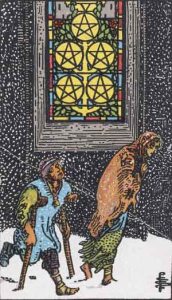 Five Of Pentacles: Whichever way you look at it cycling’s reputation is trashed at this point. Officials turned a blind eye for too long. Cycling bodies are going to need to do a lot of work to recover the standing of this sport at an international level. They had it all – the world’s attention, the passionate interest of every middle aged middle class man in lycra – and they blew it! 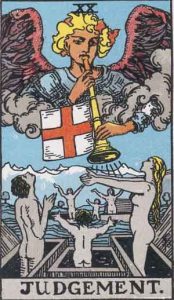 Judgement: Lance has performed a televised mea culpa with Oprah in which he made some gob-smacking admissions. And he’s personally apologised to at least some of the people whose lives he destroyed. To Betsy and Frankie Andreu for example. But saying sorry will not be enough. Not for the USADA, not for the insurance companies he defrauded, not for his fans or the cancer patients he inspired or the people whose lives he destroyed. The Judgement card in Tarot is clear. You will only be forgiven if you take action to help others. So long as Lance’s actions continue to be self-serving, so long as he just seems to be spilling his guts so he can compete again, no one will fully buy his apologies. As Betsy Andreu said on TV tonight: He has to tell the whole truth. Not a partial one.

2 thoughts on “The Tarot Of Lance Armstrong’s Confession”