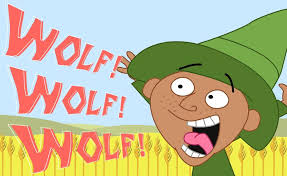 One of the most famous English folktales is ‘The Boy Who Cried Wolf’. The story goes that a young shepherd would trick his fellow villagers by shouting for help, pretending that wolves were attacking his sheep. Several times the villagers rushed to his aid, only to discover the shepherd laughing at them. Of course, when a wolf really did attack, no-one came to his aid.

I’m feeling particularly proud of my two teenage daughters today. They’e both been through some pretty rough experiences in recent years. As a mother all you want to do is protect your children but you can’t always. You don’t have control over the people who enter their lives or the battles they face, be they due to internal or external factors. Yet despite the scars my daughters carry they keep brushing themselves down and battling away.

This is the Nine Of Wands in action. Look at that fella in the card. You can tell by the bandage he’s been wounded and the fact that it’s wound around his head suggests his scars are mental ones. Yet he continues to stand there in an offensive posture defending his territory.

At the primary school where I work we talk a lot about resilience – or rather, the lack of it. Children who send their parents in to fight their battles for them. Who refuse to carry their own schoolbag, insist on a bandaid when they scrape a knee the tiniest little bit or skip school because it’s their birthday. They’re called the cotton wool generation, right? Whereas my parent’s pre-war generation are like the opposite. Never complain. Work hard. Use work as therapy. They are my model for resilience.

Do you think the younger generation lack resilience?